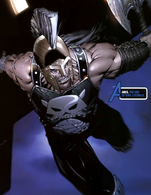 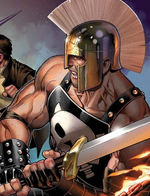 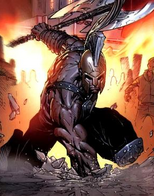 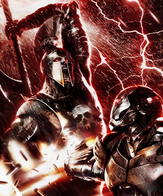 An Archangel of war, Ares was one of The Twelve but was cast out of Olympus due to his growing to love the chaos and exultation of combat over the purity of it a a means to an end, and forced to dwell on Earth.

When the Nexus Bar was imposed Ares was once again forcibly ejected from his home dimension and forced to exist as a wanderer thoughout Helion space until he grows sick of war and changes his nature in order to return home.

Because of this, and because of his base nature and yearning for conflict and strife, Ares is one of the easiest of all Archangels to summon, though one of the most dangerous and uncontrollable.

In Hel, to aid him in his endless war against the Devils, Ares has found himself at the heart of the small military unit called The Phalanx from the lost seeking redemption and crusading warriors that find their way to Hel and to his banner.

Retrieved from "https://ageofdarkseid.fandom.com/wiki/Ares?oldid=38585"
Community content is available under CC-BY-SA unless otherwise noted.