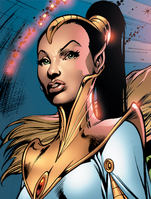 The neutral city of The Divides, the meeting place of the Fae of Maere and Dream

Ruled by the Lady Roma

Once an outpost on Earth of Ava-Lar (itself a colony of the Kree), Avalon prospered until the Hel/ Shi war engulfed the world, tipping it into a chaos and carnage that would soon destroy the battlefield it was being waged on.

After attempting to restore balance by gifting the 13 Swords to chosen Ethian warriors, the Avalonians saw that Nulr would have no choice but to impose The Nexus Bar and cut his dimension off from Hel and Shi both in order to save it.

Not being able to face the death of the magic that inspired and sustained them, The Avalonians chose instead to shift their land into The Divides, the space between the dimensions and the birthplace of all magic.

Here they became saturated with magic itself, becoming beings of Maere and Dream and calling themselves 'The Fae' ('The Blessed')

Lady Roma, ruler of Avalon and keeper of the balance.

Baron Samedi, Lord of the Ghede Loa, the mad dancers that dwell in the shadows of Avalon.

The 13 Swords of Avalon, gifted to the Ethians pre Nexus Bar in an attempt to allow them to achieve balance and avoid the imposition of The Bar.

Lord Brian Braddock (Captain Britain), mortal chosen of Roma and her champion in the world beyond.