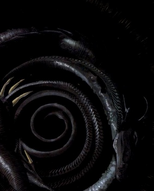 Counter balance to Pama, the Dragon of the Sun

The Helion ancient dragon contained under the holy city of Shamballah in the vast network of nightmare filledtunnels and caves called The Underworld.

In these halls roams Dog Brother #1 and his pack- Immortal Weapon, gaoler, and guard.

Even in it's slumber it's conciousness reaches out, most notably to Moondragon.

It was this being that serves as the final test for each Immortal Weapon created (Iron Fist).

Retrieved from "https://ageofdarkseid.fandom.com/wiki/Dragon_of_the_Moon?oldid=31811"
Community content is available under CC-BY-SA unless otherwise noted.