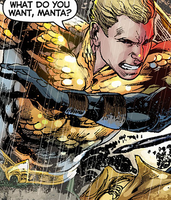 A native of the water world of Ajan-Lar, an independent one time Kree colony lying on the edges of the First Kree Empire in Ethian space.

Lord Orin is descended from White Kree stock and a noble citizen of the submarine city of Felindoria.

Lord Orin is the current leader of The Vigil, a global organisation formed to protect their world against the southern tyrant warlord Attuma.