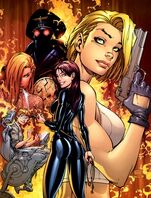 Villains of Madripoor
Add a photo to this gallery

The independent Asian city of Madripoor (Hong Kong), ruled by The Council.

Though seized by the Helfire Club following the Fall, Madripoor was overthrown by the immortal Chinese Magi The Mandarin and has grown quickly into a free city of no loyalty to Shi or Hel, or indeed even Eth, being concerned only with it's own self interests.

The home to pirates, rebels, and all other outsiders, Madripoor is neutral ground, strictly enforced by the will of The Council.

Cheshire, the Vietnamese/ French assassin who is the hand and bodyguard of The Mandarin

Retrieved from "https://ageofdarkseid.fandom.com/wiki/Madripoor?oldid=42310"
Community content is available under CC-BY-SA unless otherwise noted.