In a state of civil war between the group calling itself 'The Authority' (With Norman Osbourn as the 'legitimate' President of the U.S.A) and Sebastian Shaw's New Order.

Osbourn controls the West, with Shaw strongest in the East Coast. The South remains fiercely independent as a newly forming Republic, while the S.H.I.E.L.D backed Resistance seeks to defeat both Shaw and Osbourn and form a new true democracy where all are equal. The New Nations sit amongst it all claiming neutrality.

The National Bugle (Resistance newspaper of the East Coast, based in Gotham)

The Daily Planet (The legal newspaper of the East Coast, sanctioned and controlled by Sebastian Shaw and his New Order)

Order maintained by L.A.W units, under the juristiction of System Control, backed up by heavy response Sentinal units

Native American reclaimed land that has declared succession, though this has not been formally recognised by the 'legitimate' goverment of The Authority 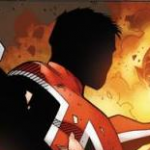