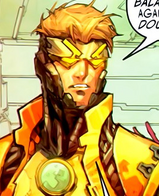 Australian special response agency, now the heart of the Resistance in the Oceanic and Far Eastern Asian regions.

Engaged in a Oceanic wide struggle with The Society and their Marauders that often spills over into the neighbouring countries of Asia.

While the organisation have good relations with other Resistance groups such as The Titans, and on a more global scale S.H.I.E.L.D, it tends to avoid variant operatives, prefering to utlise SymTec enhanced humans and synthetics (Symdroids).

P.R.I.M.U.S are heavily dependent on the use of Fremaslon as the basis for psionic action and defense with their Gold Star programs.

Boomerang, ex Silver Star agent, now a criminal, currently working with The Marauders and The Society.

Headshot, defested symborg, now an assassin for The Society