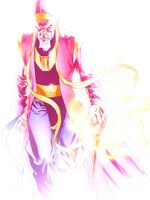 The Priests of Pama

The Sorcerer Supreme of Earth prior to his student Stephen Strange tanking on the mantle, The Ancient one is a magi of immense power and wisdom and an Avatar of Nulr.

Residing in the hidden Tibetan city of Shamballah, the Ancient One remains sought after teacher to those select few that learn of his existance.

Retrieved from "https://ageofdarkseid.fandom.com/wiki/The_Ancient_One?oldid=31804"
Community content is available under CC-BY-SA unless otherwise noted.