Heroes of The Savage Land

Villains of The Savage Land 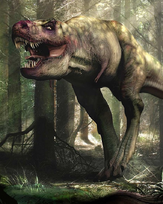 Dinosaurs of The Savage Land
Add a photo to this gallery
The vast expanse of tropical jungle that sits at the heart of Antarctica, enabled by the existance of the ancient Kree generators of the city of Tara-Ka, the original Earth colony of the first Kree Empire.

The Savage Land is home to long extinct species of life, being cut off from the rest of the world for millenia, including dinosaurs.

The Helborn of the south, led by Axeman Bone astride his Helion mutated dinosaur Daybane.

Ka-Zar and Shanna, with their sabre tooth Zabu, adopted protectors of the Children of the Moon, the peaceful northern tribes.

Atrea, the immortal seer born of Kara-Ta but now living with her acolytes in isolation in the Highwall Mountains, protected by The Hulk

Retrieved from "https://ageofdarkseid.fandom.com/wiki/The_Savage_Land?oldid=42308"
Community content is available under CC-BY-SA unless otherwise noted.